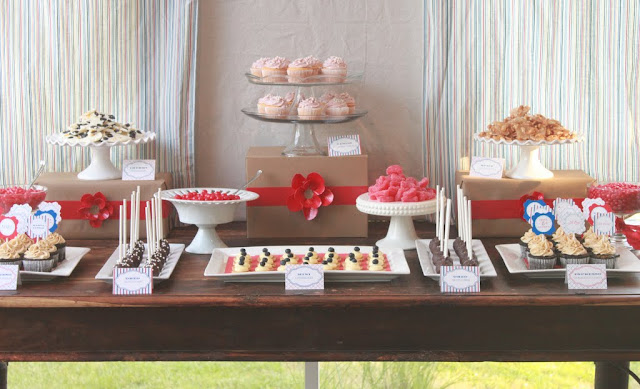 One of my sweet friends, Andrea, moved to another state earlier this summer.  When her best friend, Loren, came to me in the spring about helping throw a going away party for Andrea and her husband, Will, I jumped at the chance to help. 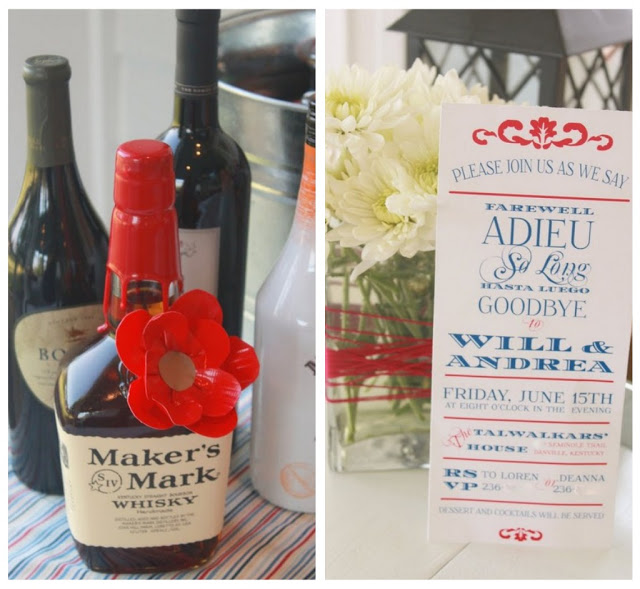 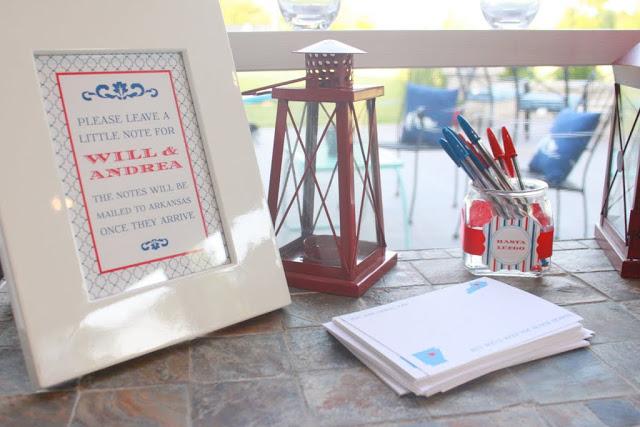 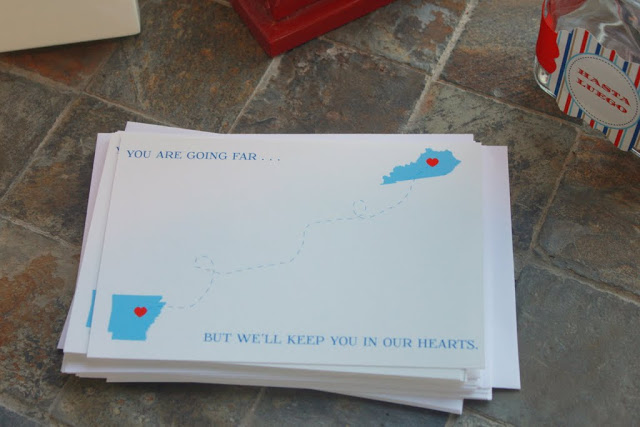 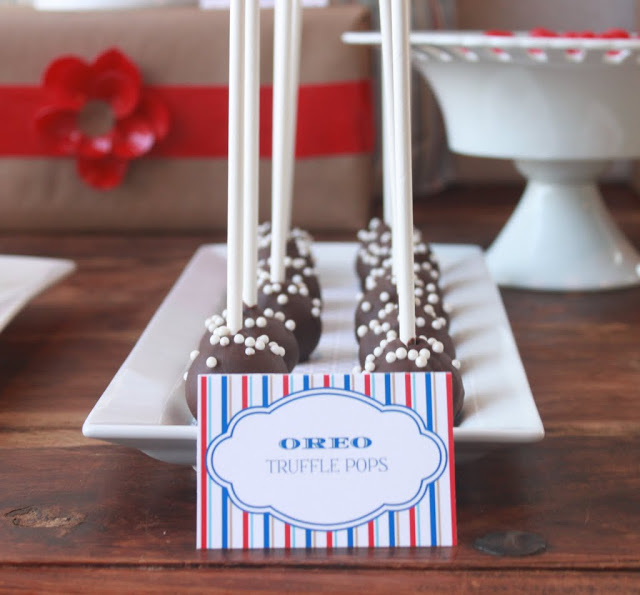 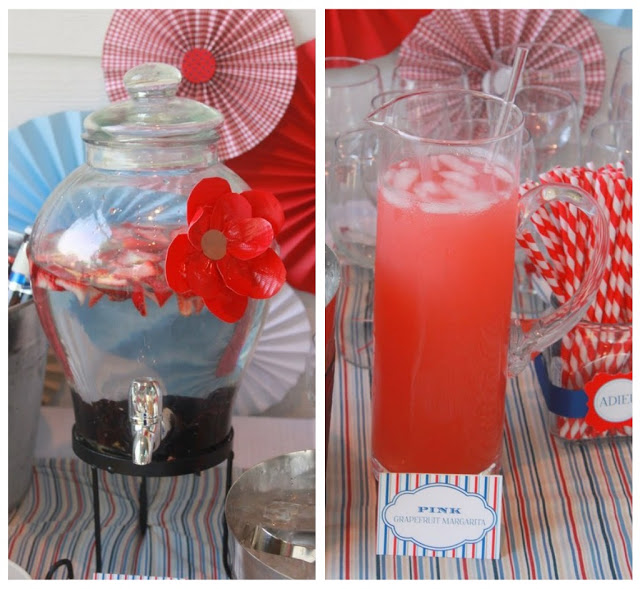 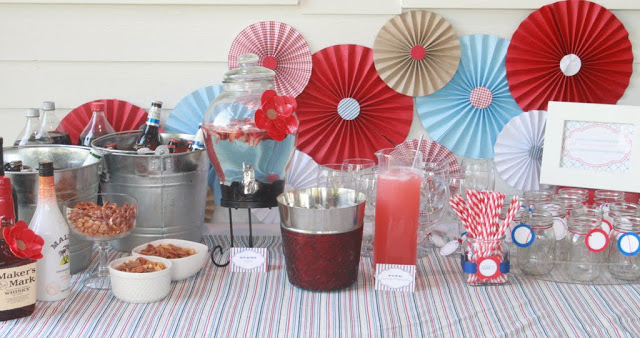 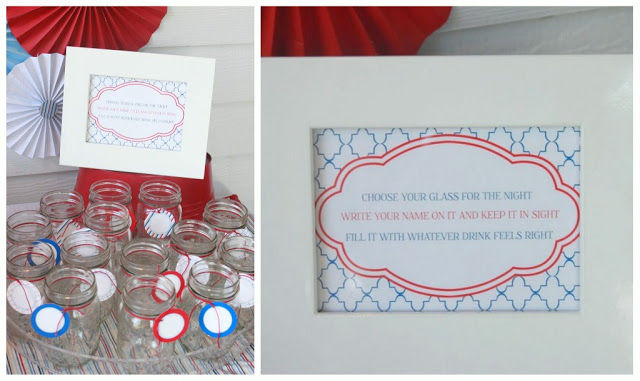 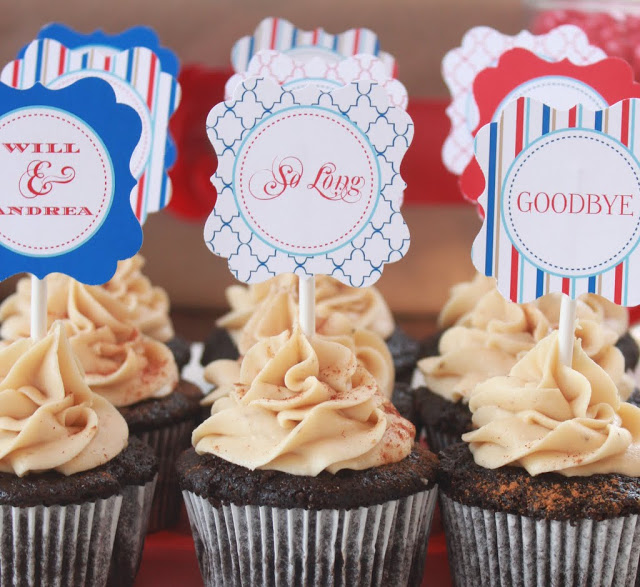 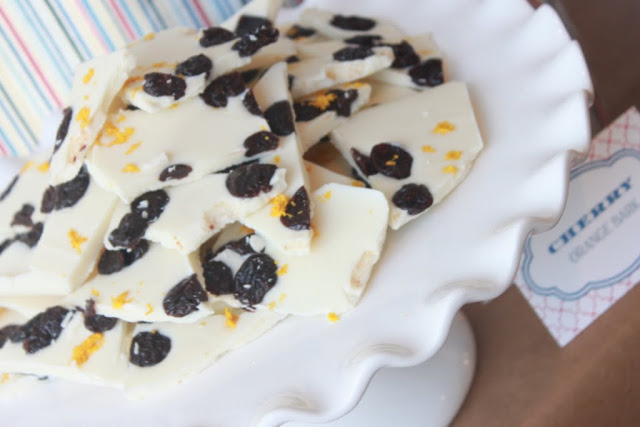 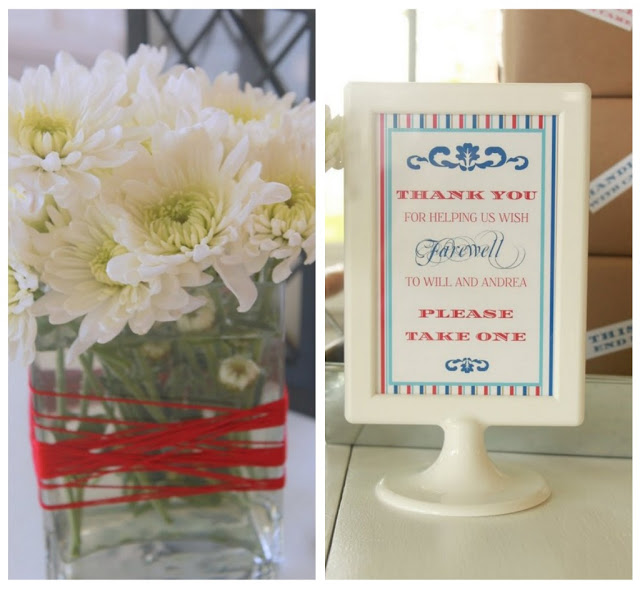 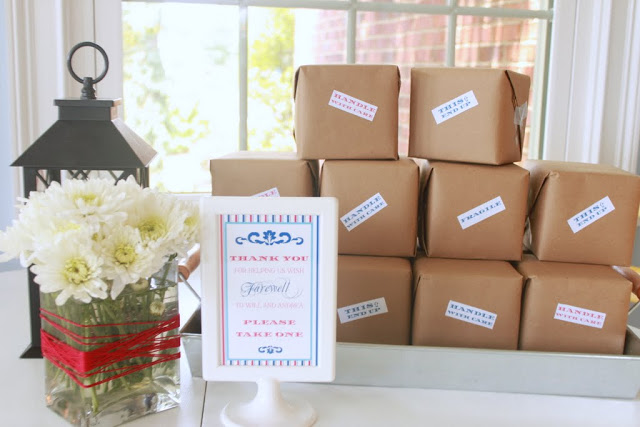 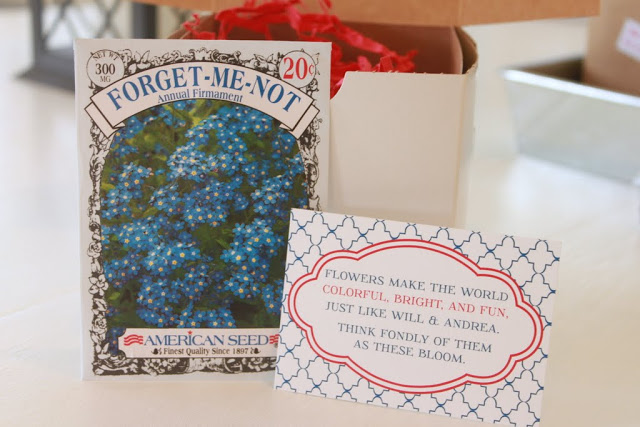 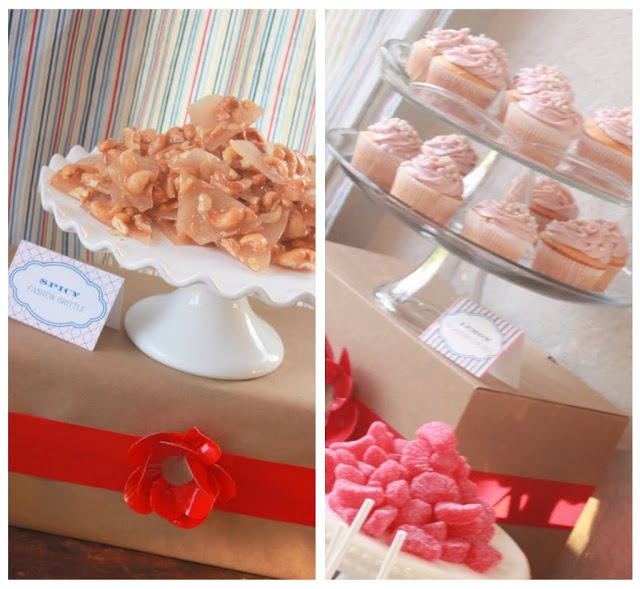 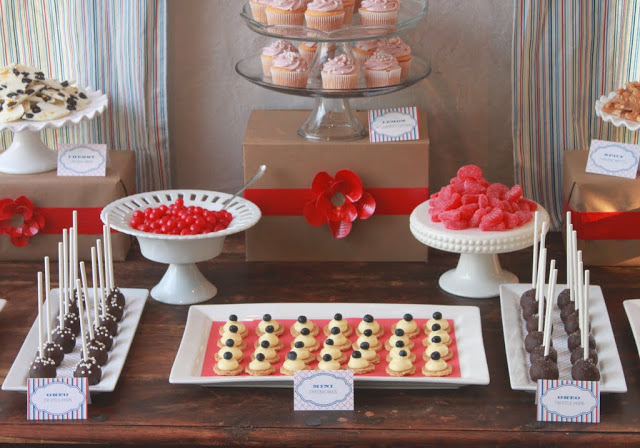 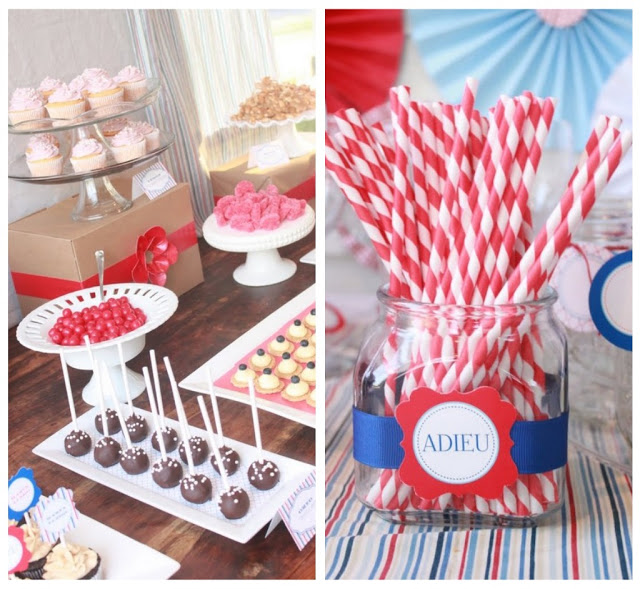 Party Details:
{Decor} The first party element I incorporated was the moving box.  Moving boxes were used on the dessert table as pedestals.  To make them, I wrapped small boxes in craft paper.  The boxes were decorated with the other party element — duct tape.  A red duct tape “ribbon” and flowers made out of duct tape adorned the boxes.  The tutorial for the duct tape flower can be found at How Joyful.  More duct tape flowers were used to decorate jars and bottles throughout the party.

At the end of the night, guests were also given little moving box favors.  The boxes were filled with homemade dark chocolate cashew bark and seed packets of Forget-Me-Nots.  Enclosure cards in the favor boxes read, “Flowers make the world colorful, bright, and fun, just like Will & Andrea.  Think fondly of them as these bloom.”

For the dessert table, red and blue striped fabric was used to make curtains for the backdrop.  (You might recognize the fabric from my son’s Bowling Party.  Reusing party supplies in a new way is a great money saver.) The red and blue striped and lattice patterned party printables coordinated with the fabric and party design.  The printables are available in my Etsy Shop.  The modern, preppy design of the printables and the party design also reflect the style of the guests of honor.  The party was held on our screened-in porch, the perfect spot for a summer, southern cocktail party.

Other details included a table where guests could leave a note for the guests of honor.  I designed note cards that read, “You are going far . . . but we’ll keep you in our hearts.”  The notes will be mailed to Will & Andrea, on a periodic basis, now that they have moved.

{Food} All of the desserts were planned with the guests of honor in mind.  I made Raspberry Lemon Cupcakes with Lemon Curd filling and Raspberry Buttercream and Chocolate Cupcakes with Espresso Buttercream, both of which incorporate the guests of honor’s favorite flavors.  Homemade spicy cashew brittle, Oreo truffle pops, mini cheesecake bites, and white chocolate cherry orange bark were also served. The guest of honor is not a big dessert or chocolate person, but she loves sugary candy.  We made sure we also had plenty of candy choices: cherry sours, hot tamales, cherry slices, red hots, and Twizzlers.
The drink table included a selection of craft beers, pink grapefruit margaritas (the guest of honor’s favorite), wine, and berry water.  The drink table was covered with a striped table runner that matched the dessert table backdrop.  Assorted paper fans served as a backdrop to the drink table.
It was a fun, but bittersweet evening, filled with lots of good food, good friends, and love.  It was fabulous to celebrate someone that means so much to us, but a little sad to be wishing her farewell!
Party Printables Collection: 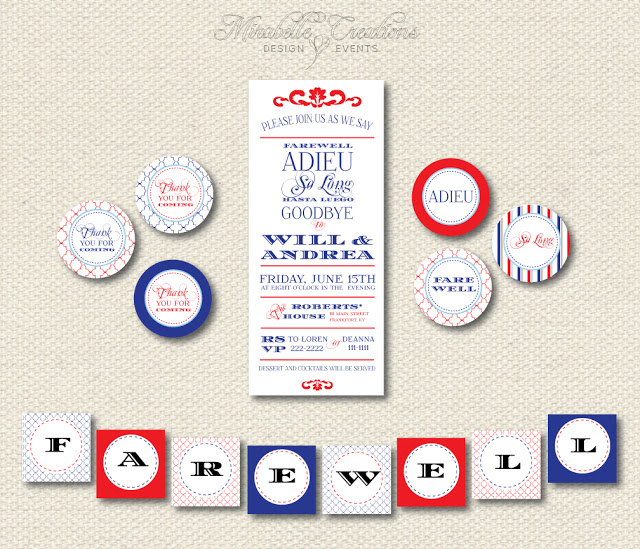 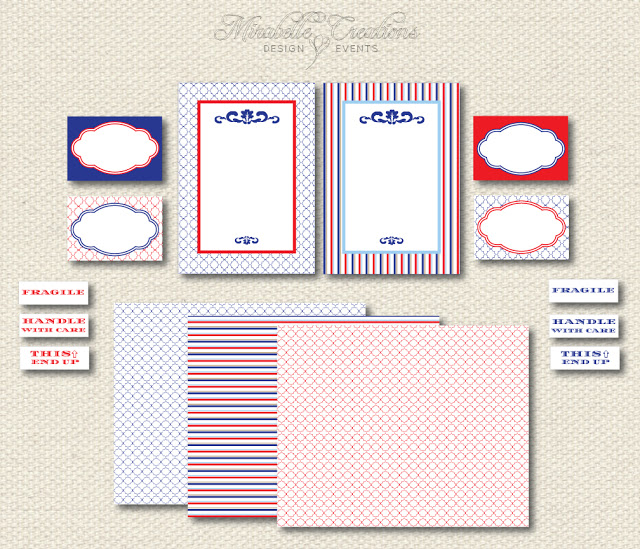 Now available in my Etsy Shop 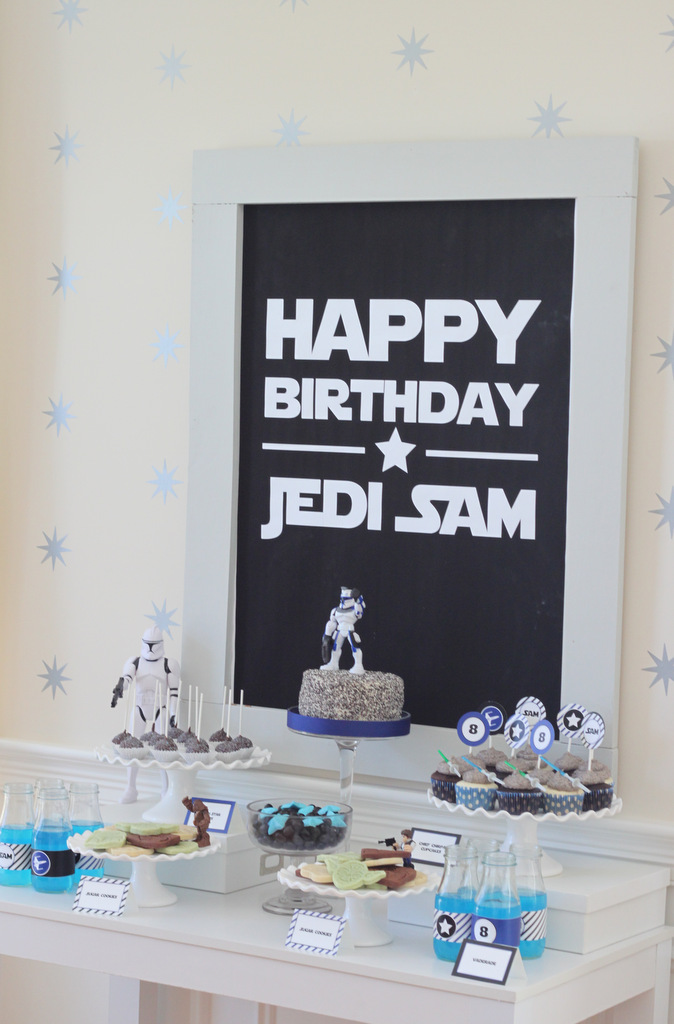 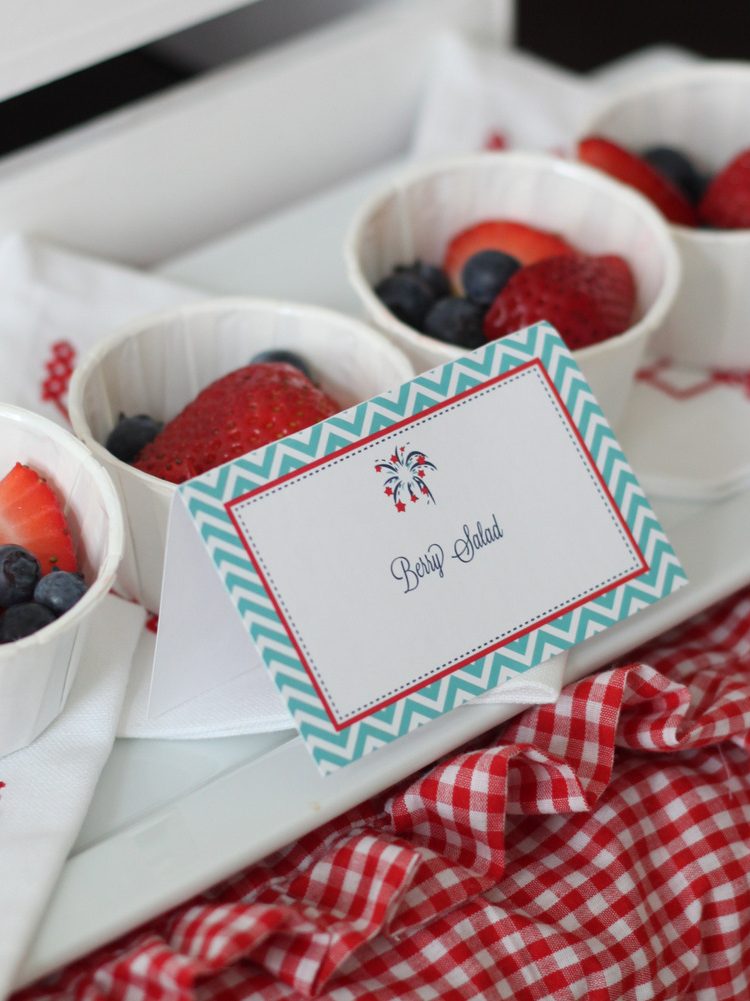 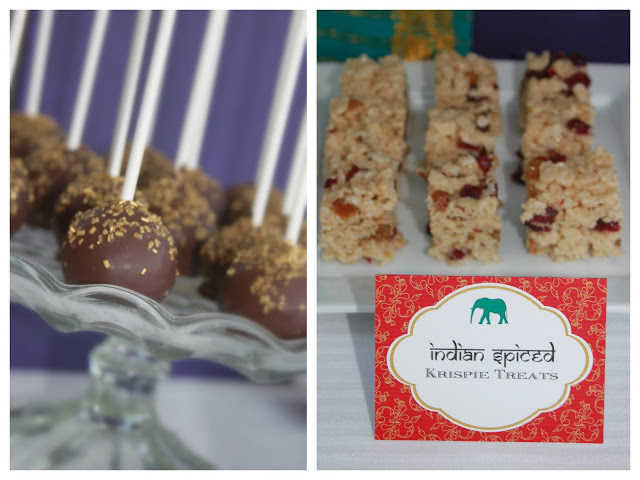