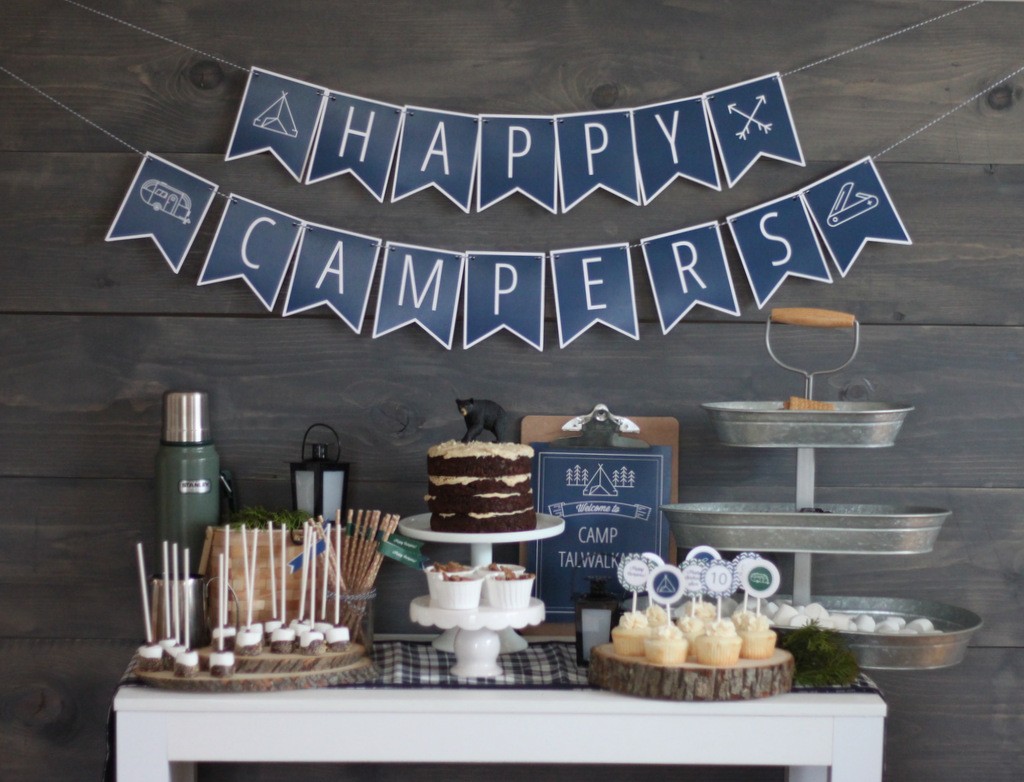 When I asked Sam what he wanted to do for his 10th birthday this year, he told me that he wanted to keep it low key and just have one or two boys from his class spend the night.  But, then he told me, “Of course, I want you to make a dessert table.”

So there was a small part of me that was a little excited that he requested that.  I might be in a little bit of – okay, maybe in complete denial of – the fact that my littles aren’t so little anymore.  Even my baby is now into double digits.  The days of big, fun birthday parties are kind of ending.  Even themes aren’t so easy to come up with now that they are older. 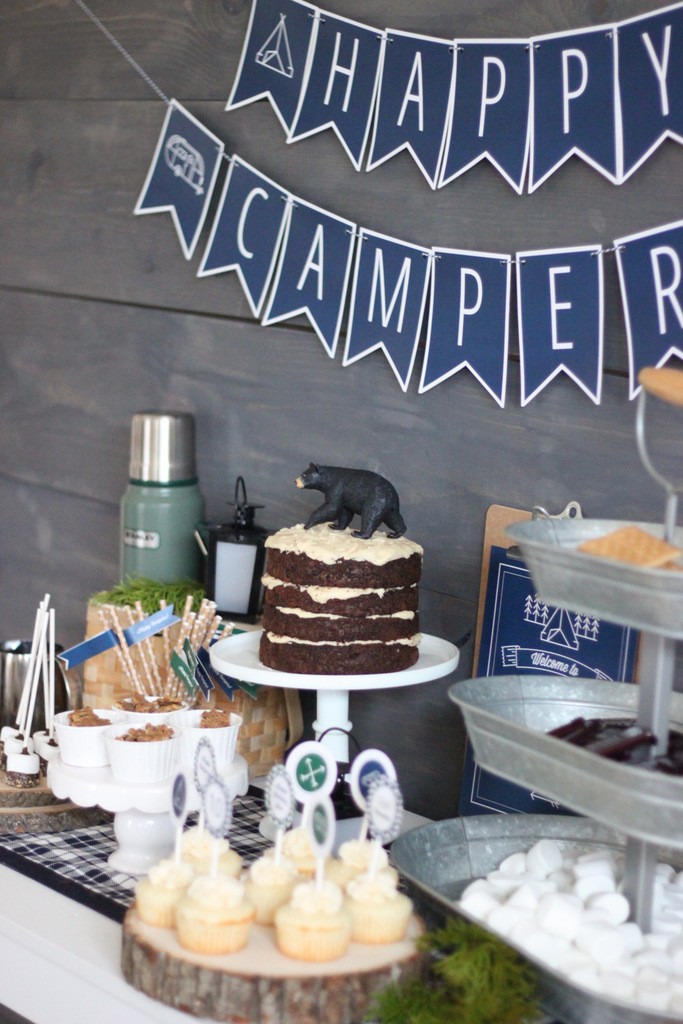 Luckily, my boy had ideas of his own, this year.  It was his idea to have a camp-in sleepover.  We set up a tent in his bedroom for them to sleep in.  The dessert table theme also included camping party ideas that he helped me create. 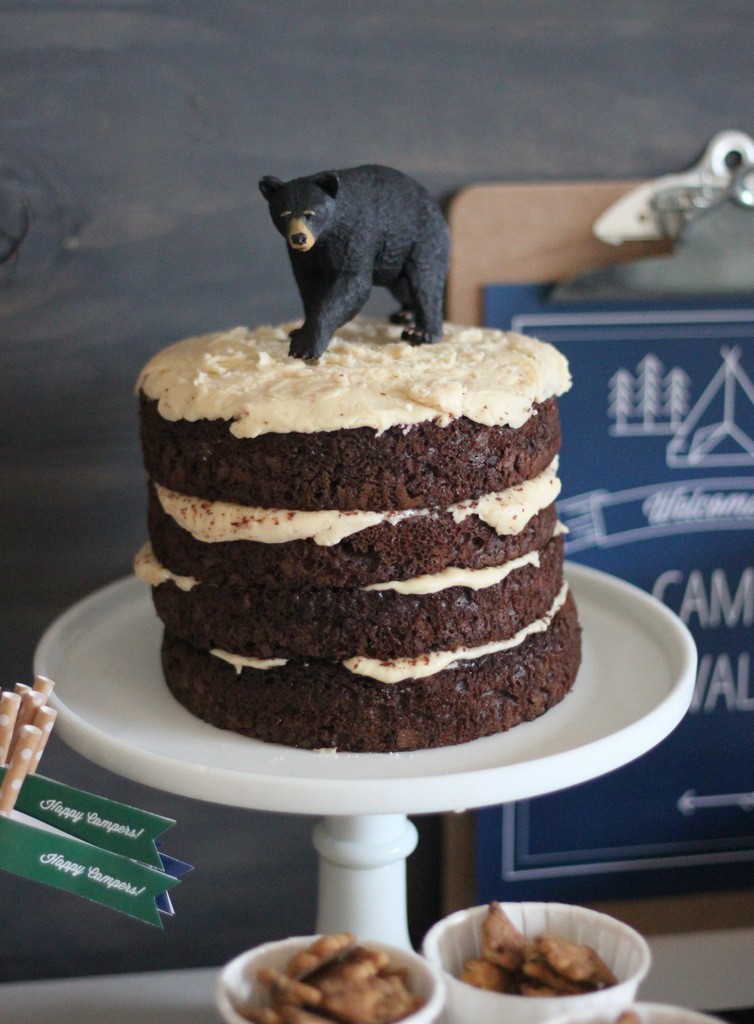 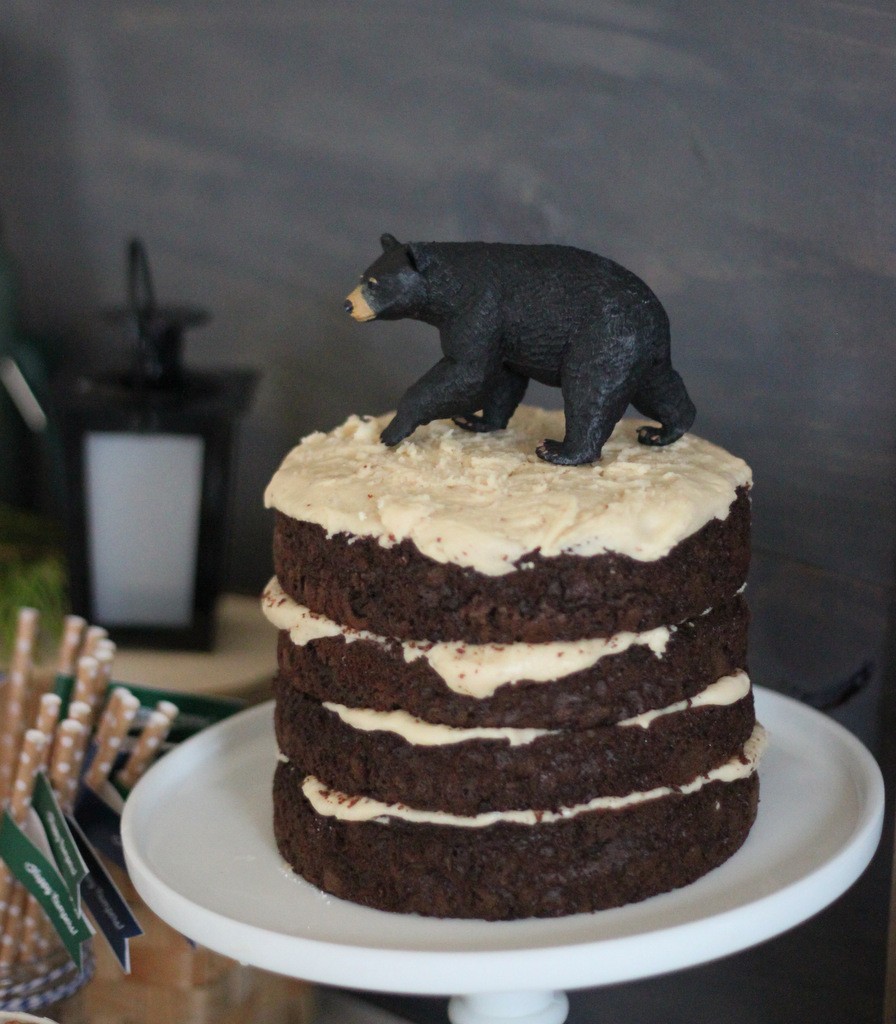 Sam requested a chocolate cake with caramel buttercream.  The caramel buttercream was very rich, so I decided to just frosting each layer and leave the outside of the cake unfrosted.  We looked through many camping themed parties online together before his party.  He saw some cakes that were topped with little bears and loved that idea, so we simply topped his cake with a little toy bear. 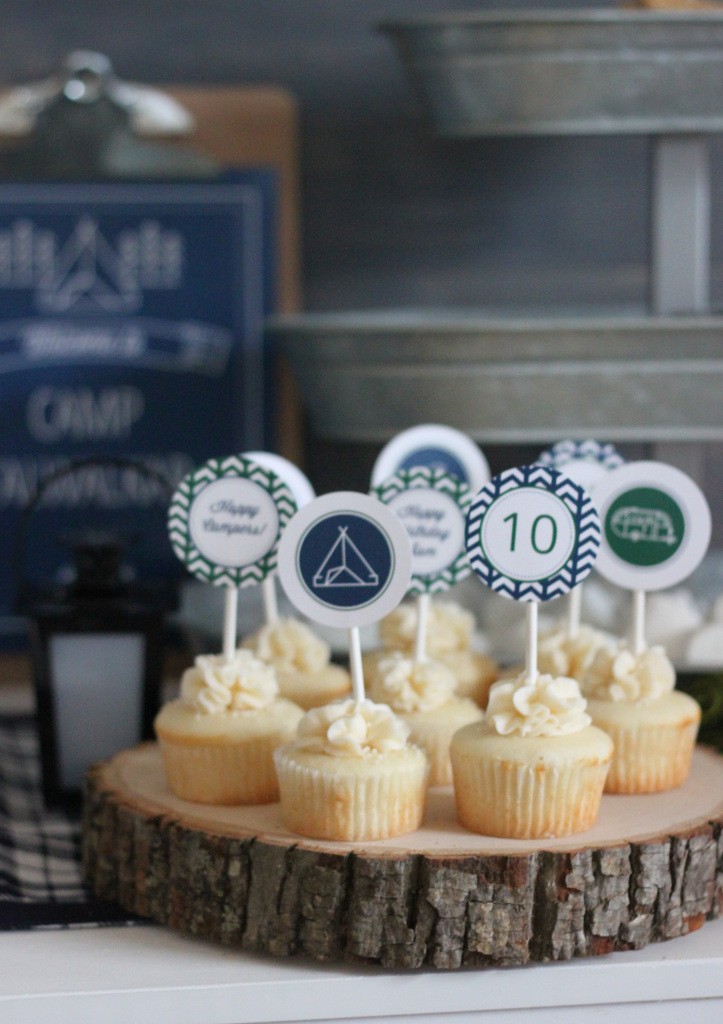 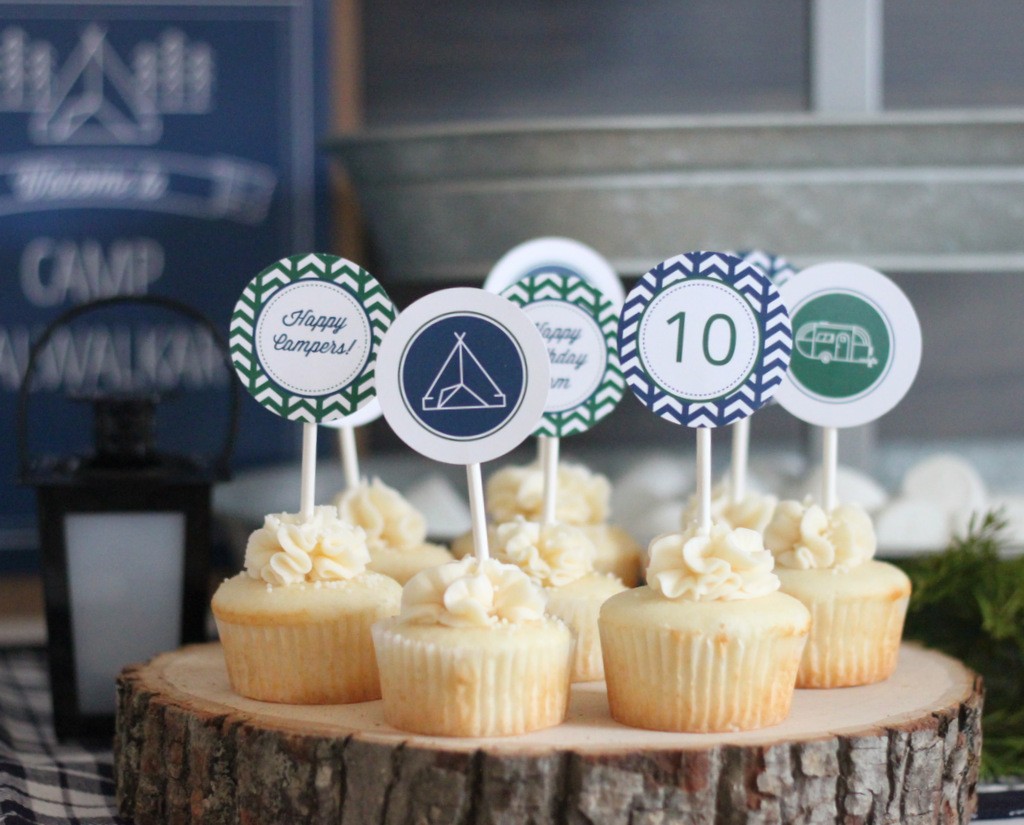 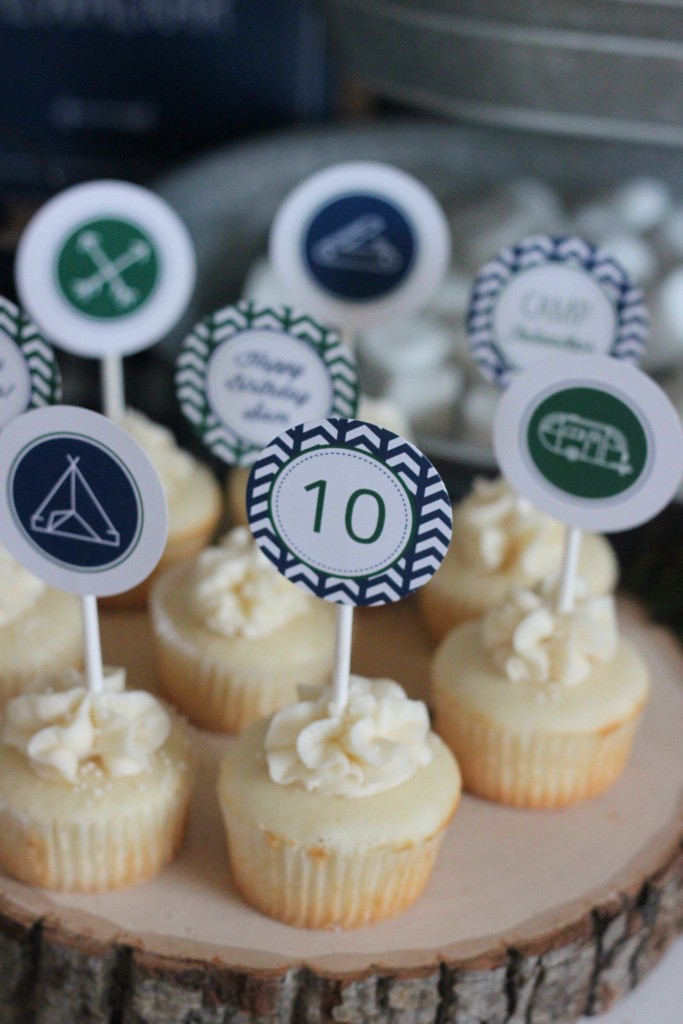 Vanilla cupcakes with vanilla frosting were also Sam’s request.  He told me that he wanted to have the vanilla ones in case someone didn’t like chocolate 🙂  We placed them on little wood slice chargers and topped them with our camping party Collection that will be coming to the Esty Shop very soon!  Sam picked the navy & hunter green color palette, then went with a simple design for a more modern looking camping party look. 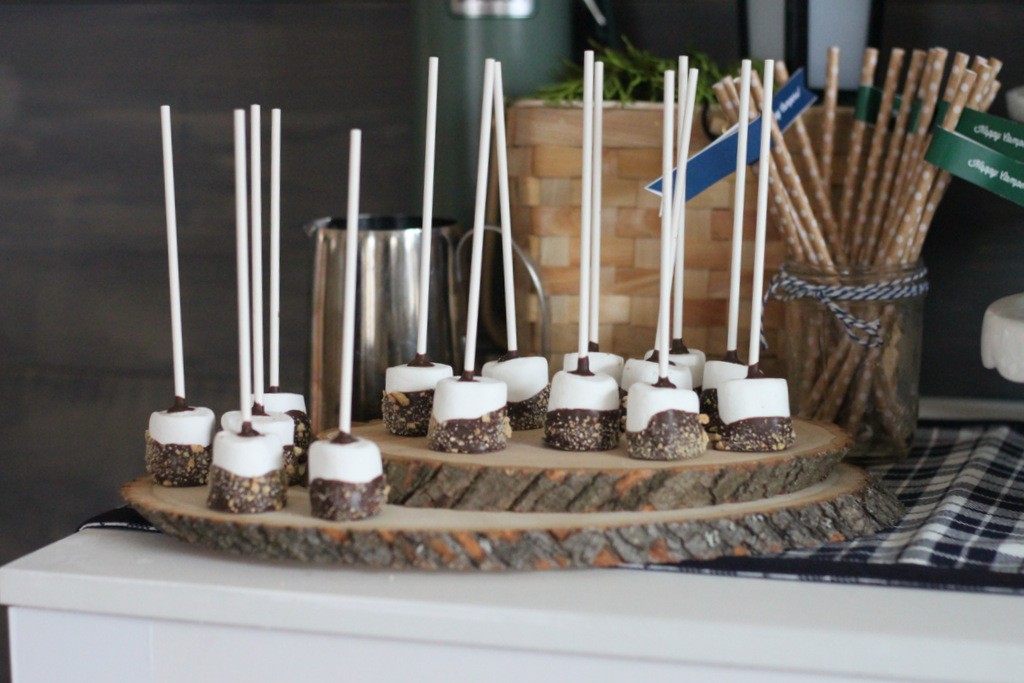 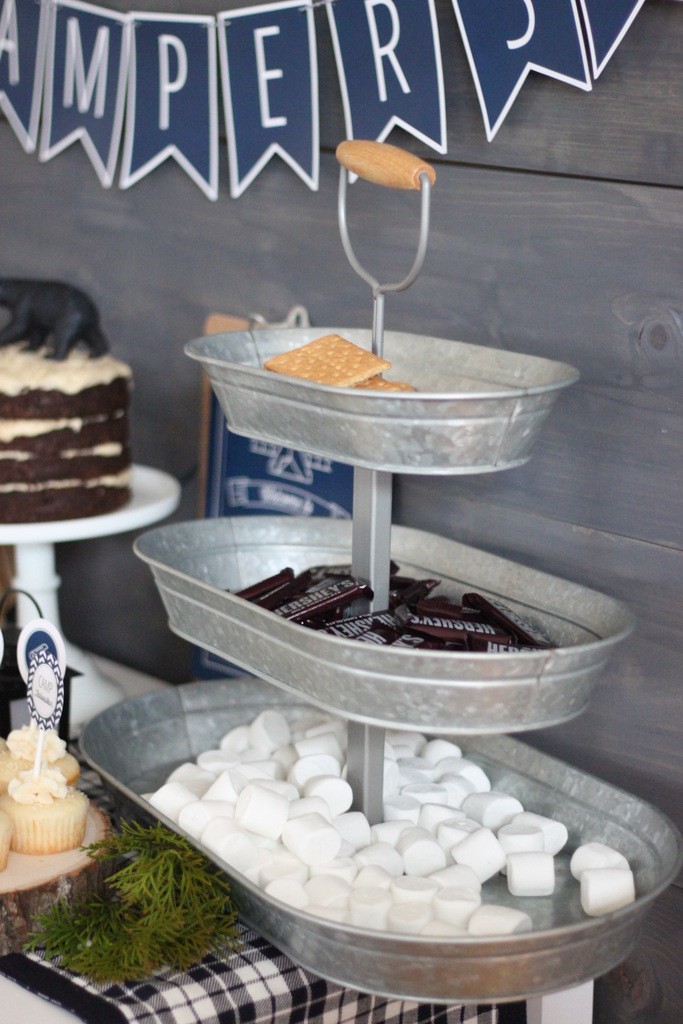 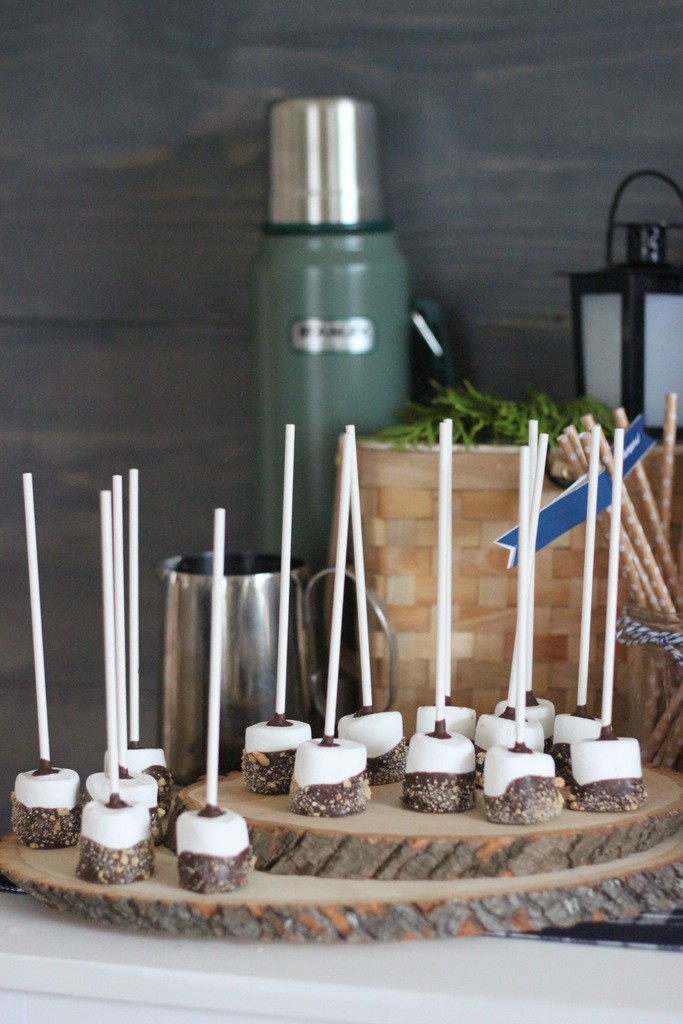 Since it was a camping party, we had to have s’mores.  I made Marshmallow S’mores Pops; always a big hit with the kids. We also had chocolate bars, graham crackers and marshmallows for the kids to make S’mores over the fire.  But, honestly, once they ate either a cupcake or cake and had a couple of the S’mores Pops, they were stuffed and chose not to make S’mores the old fashioned way! 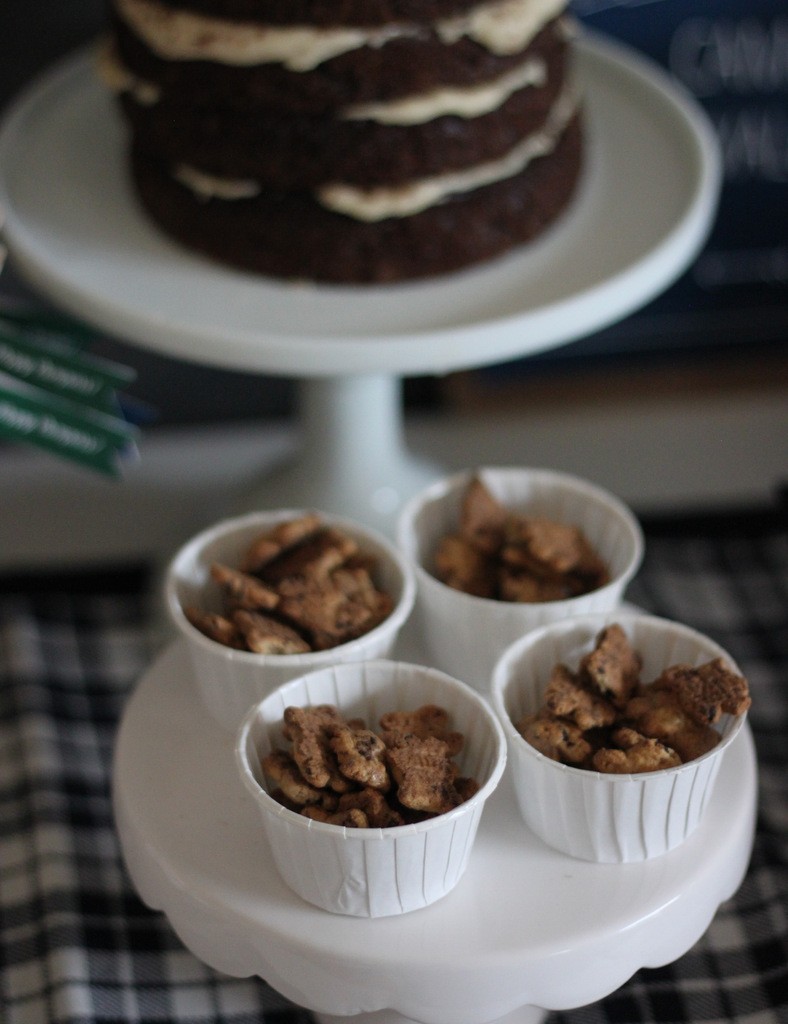 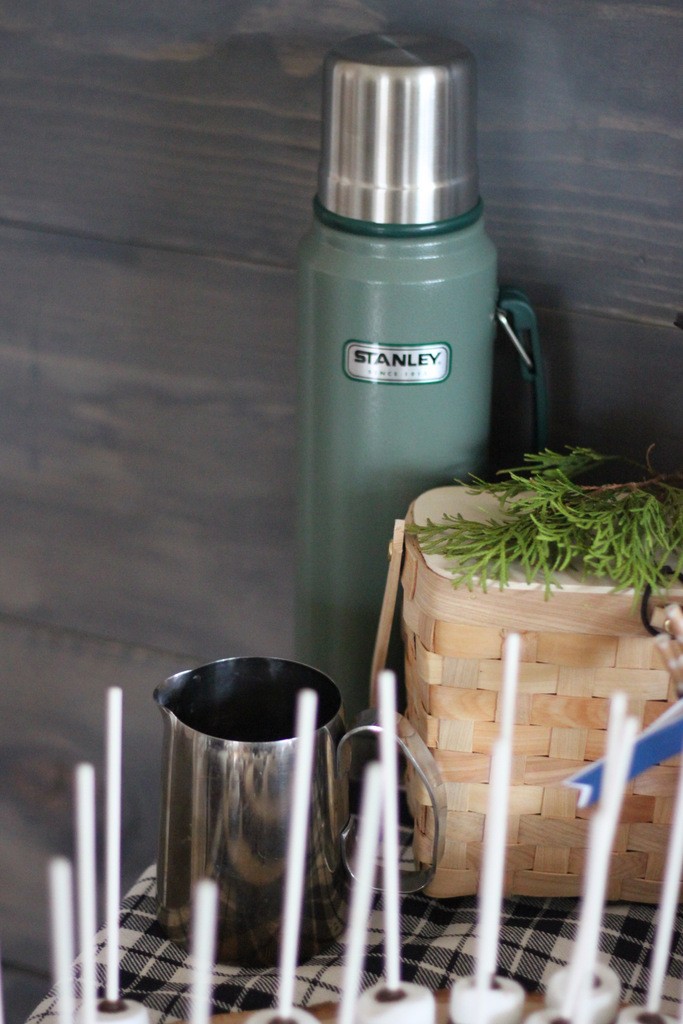 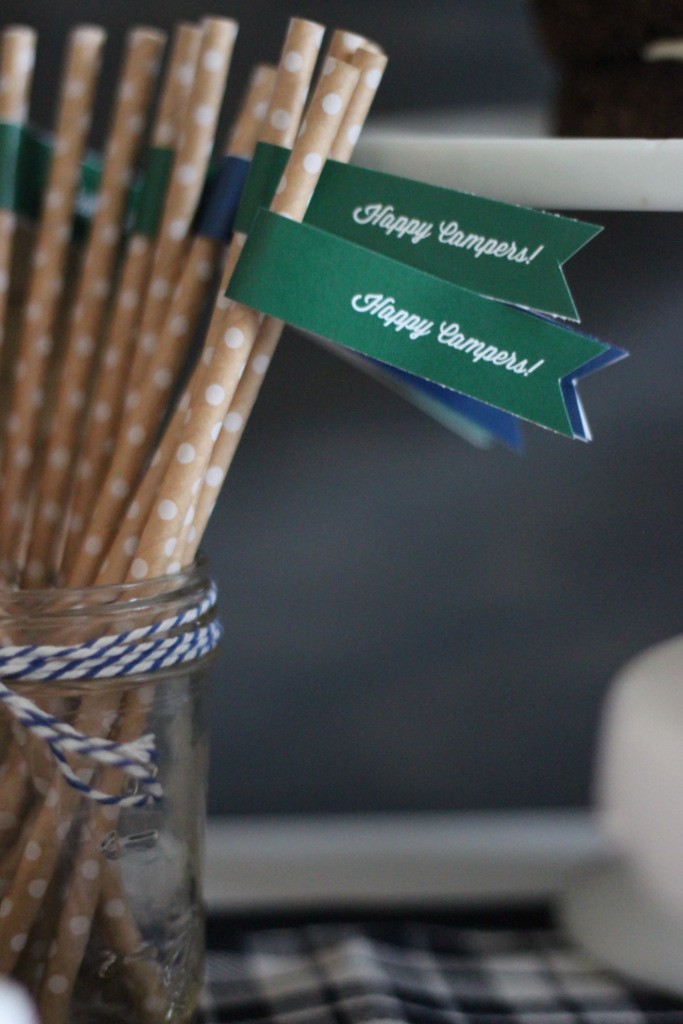 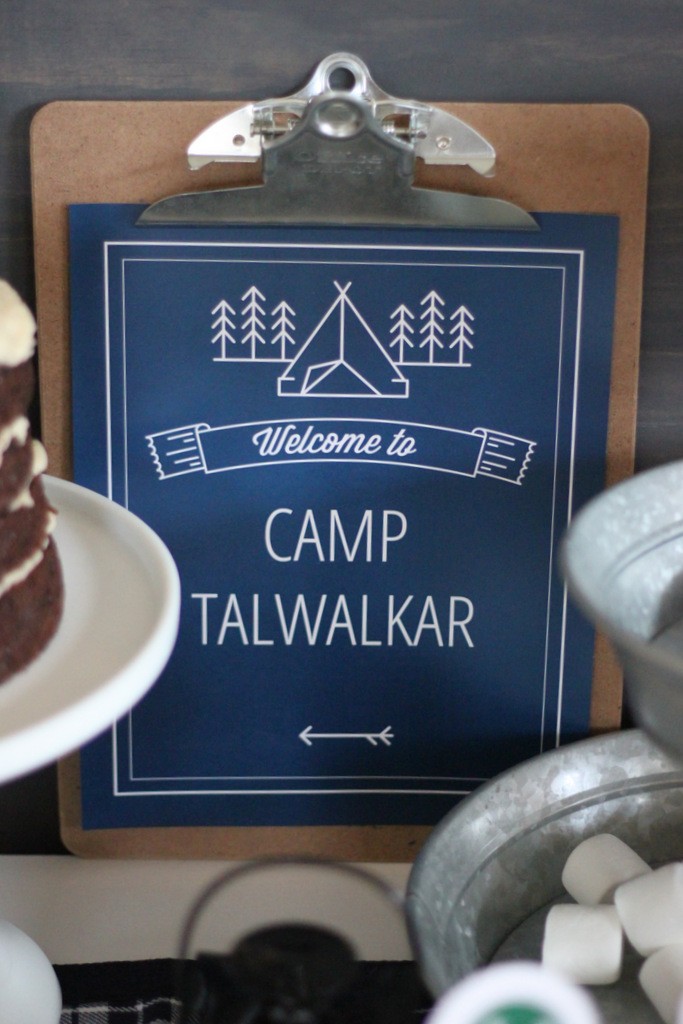 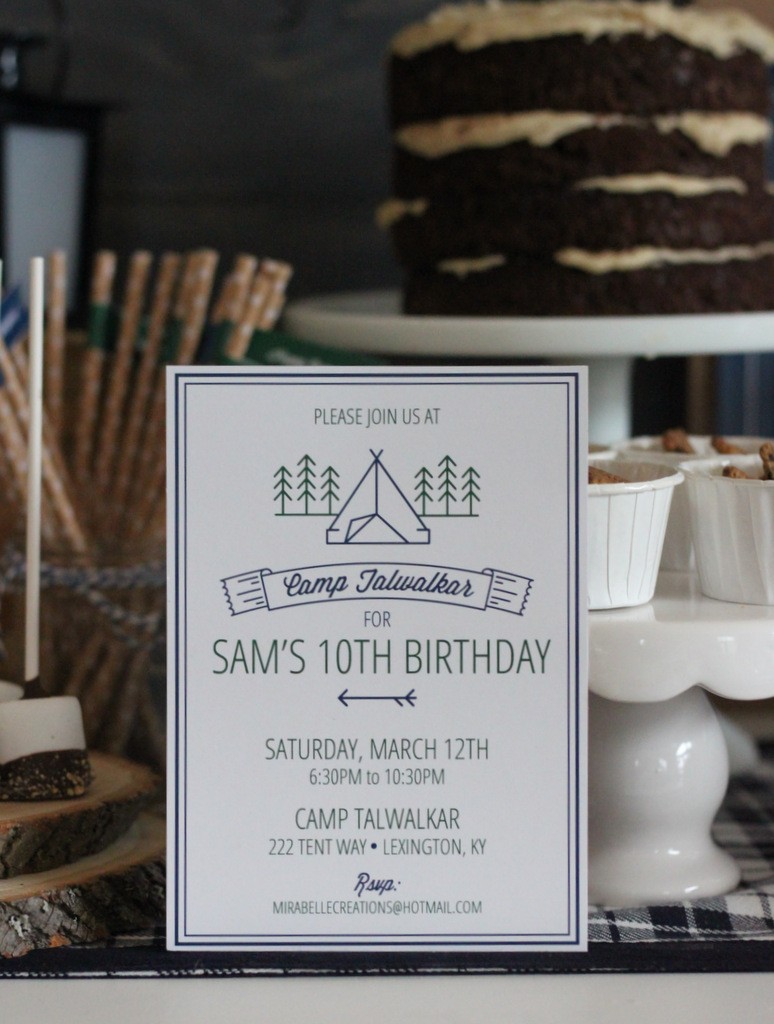 We added some fun camping theme accessories to finish off the table. A plaid table runner, Stanley thermos, evergreen clippings, Camping party sign, and “Happy Campers” drink flags were some of my favorite accessories.

The banner added color to the grey stained wood wall backdrop.  I use this wood wall to display my art prints at Market 301 and other shows, but it was the perfect backdrop for this camping party, too! 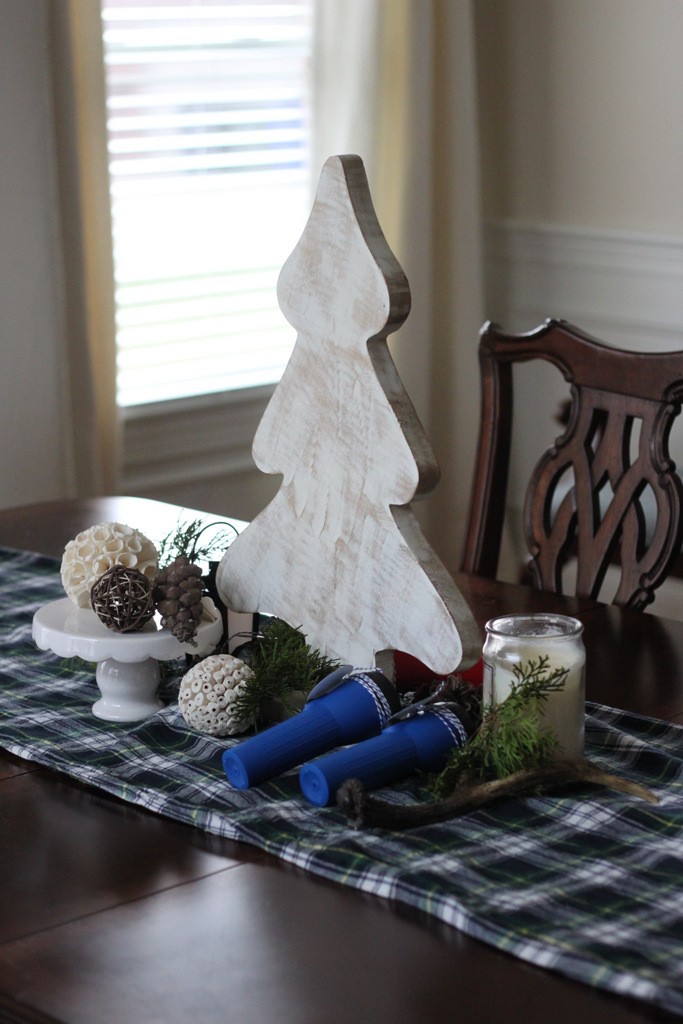 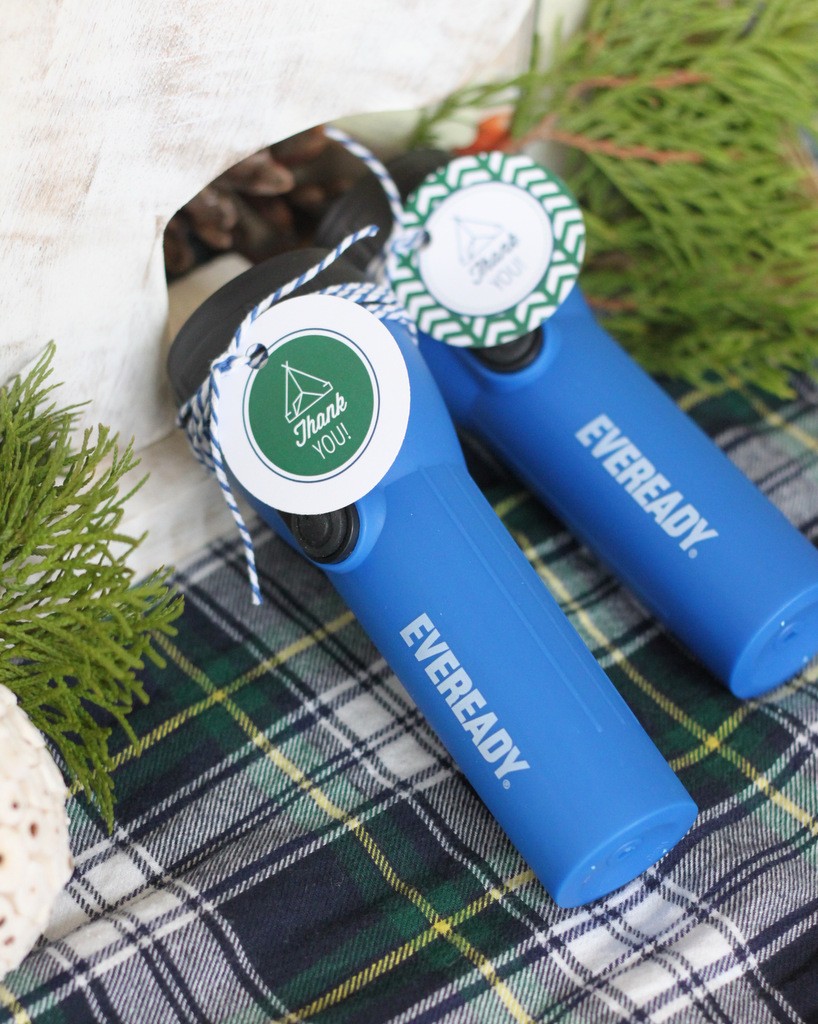 For party favors, Sam gave every guest a flashlight to take home.  We wrapped them with baker’s twine and attached a thank you tag from our Camping Party Collection. 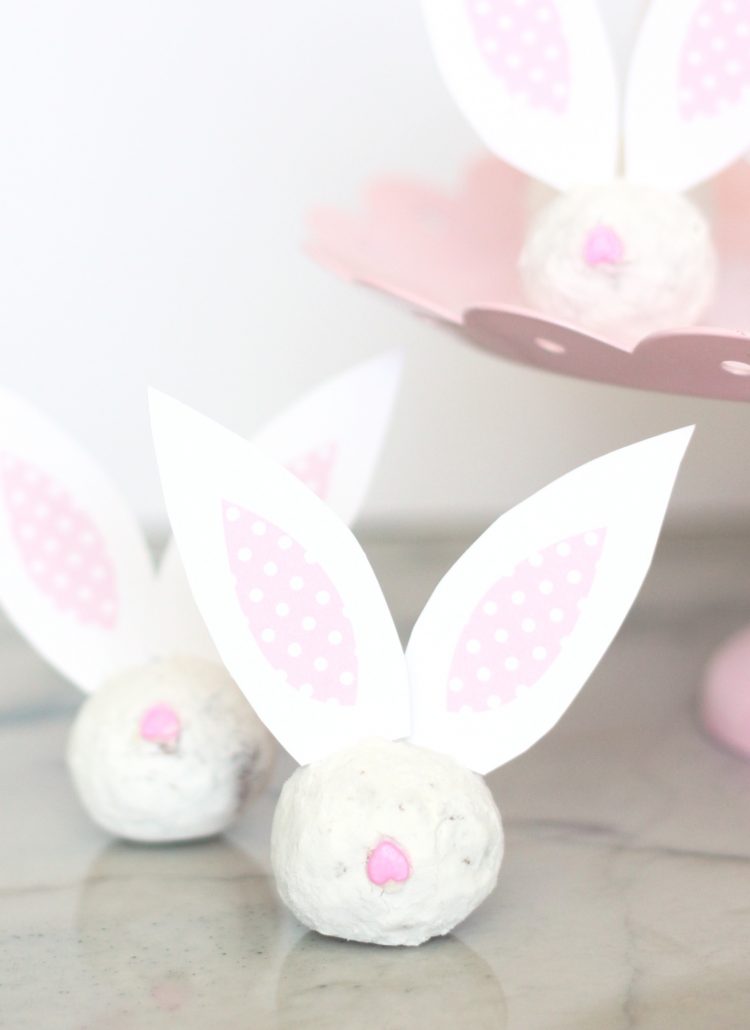 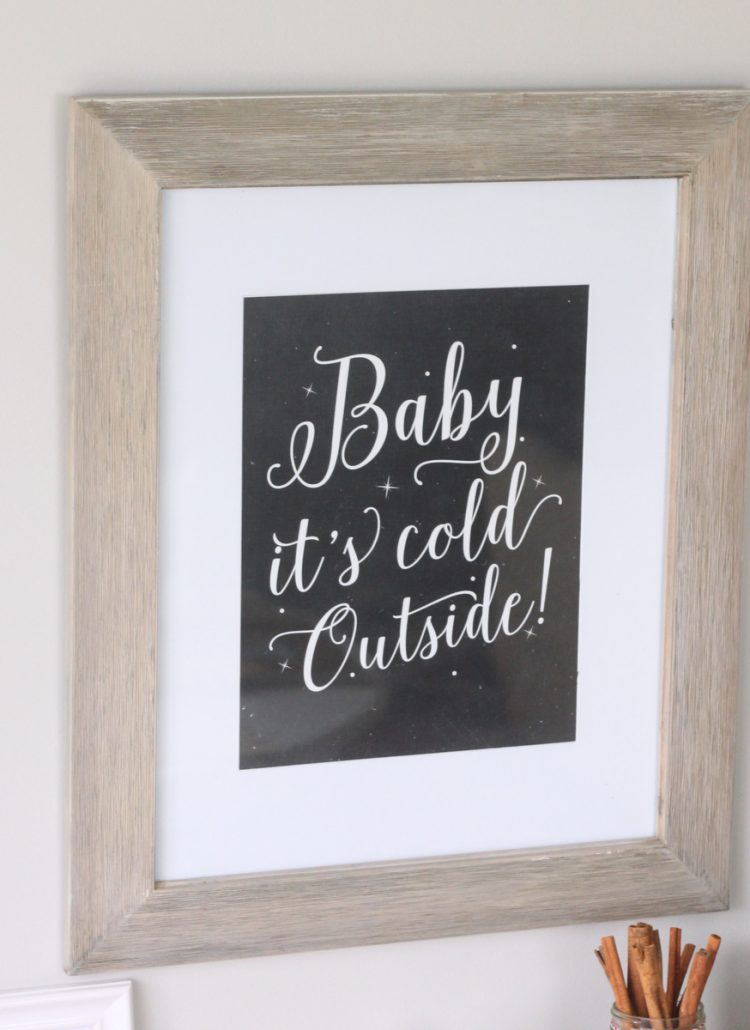 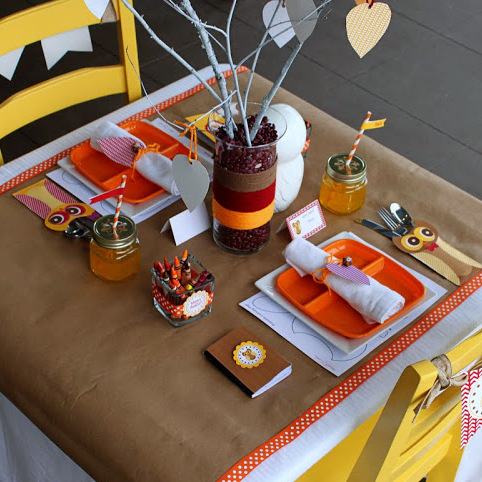 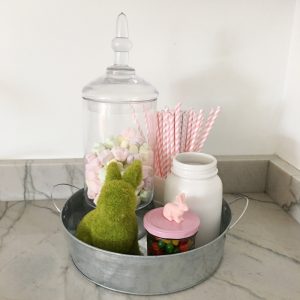 A Little Bit of Spring Decor Around the House